The stand out here, was of course, Middlemarch. I had read it in college and remember thinking to myself, “am I really going to expend my youth reading about agricultural practices in 19th century rural England?”   But of course, it is so much more. Many people have called it the greatest English novel, and, to disprove this opinion, I would have to read a whole lot more English novels. So I provisionally agree.   

Last month’s reading of Faulkner required the antidote of Morrison, and I read her essays, and her first novel The Bluest Eye.    Also of undisputed greatness–though censors the world over have been trying to suppress it for years. I doubt they’ve read it.  

The book that left me straddling the fence, wavering in opinion, and wondering about its suitability for prize-winning ,  was the International Booker Prize winner, The Discomfort of Evening–which announcement and  ceremony I accidentally happened upon as it was taking place live  online. Prizes invite dispute, which enlivens book reading in general, so I welcome them.   The book was great, but green.   I was amazed to learn that the distinguished judges read all the contenders, starting with 128 books.

And if you haven’t already read Signs Preceding the End of the World, run don’t walk to your local bookstore, and pick it up curbside.  

Proceeding apace! After the evocative gothic image of the sanctimonious peaches-and-cream maiden marrying the cadaverous Casaubon, Middlemarch has quickly devolved into a village comedy with all the usual types: the aunt busybody, the congenial parson, the young rake, the dull but earnest suitor. I’m a jaded English Lit major, and have never been a fan of the Marriage Plot, general in 19th century novels, unless there is, say, a madwoman in the attic or an egregious breach of manners, say, nakedness in the drawing room. It’s all too genteel and proper, and I await some grisly murder or monstrous betrayal beneath the scrim of politesse. There was a recent interview with Emma Cline, whose first novel was The Girls, about a Manson-like murderer with a cult of young women. She has recently written a story from the perspective of a Weinstein-like protagonist, and her interviewer suggested there might be something wrong with presenting a predator and criminal in a way that might make him sympathetic. Cline rightly retorted that monsters and madmen are better subjects for stories than the upright and respectable, and doesn’t humanizing them serve us all better, enabling us to finally see them? I agree. Unless, say, the subject is repression itself. I’m thinking of Anita Brookner novels, or The Remains of the Day. There are no hard and fast rules anywhere in literature. But are we, with Middlemarch, headed towards Anna Karenina on the train tracks? The Ace of Hearts at the end of Tess of the d’Urbervilles? I know where this is going, I’ve read it already, and every other one of these Marriage Plot books. The women cannot win.

Except, have you heard of Miss Marjoribanks, by Margaret Oliphant? I hadn’t either, until today’s London Review of Books arrived in the mail and I read this article by Tom Crewe, where he writes:

“The novel tells the story of Miss Marjoribanks, and of her return, after finishing her schooling, to live with her widowed father in Carlingford, where already

preparations and presentiments had taken vague possession of the mind of the town, as has always been observed to be the case before a great revolution, or when a man destined to put his mark on his generation, as the newspapers say, is about to appear. To be sure, it was not a man this time, but Miss Marjoribanks; but the atmosphere thrilled and trembled to the advent of the new luminary all the same.”

Doesn’t this sound good? Read on, that article has choice excerpts. Miss Marjoribanks never gets married! Or does she? I have ordered a copy. Apparently Mrs. Oliphant wrote 98 books, so this may be the start of something I can’t finish. But first, let’s find out what happens to Dorothea Brooke. I have forgotten the details. It’s not looking good for her, let’s all agree.

And before I go, I quite enjoyed Chapter 13, and the argument between Mr. Vincy and Mr. Bulstrode, with its suppressed insult, insinuation, veiled threat and oblique jabs. So English. Bulstrode is emerging as a villain, a character it gives one pleasure to detest. If the result of all this repression is vicious and amusing banter, and elegant eviscerations, OK OK, I’m along for the ride. 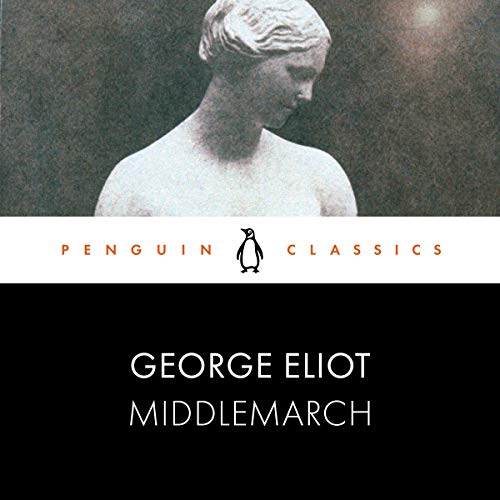 Middlemarch, like many many-paged books, seems to be a top candidate for lockdown reading these days, 819 pages in my Penguin edition.  I just read the long, dense, and repetitive Absalom, Absalom again, it being timely, given that it is about how great wealth and power requires the exploitation and degradation of women and black people–and by extension, all people of color, children and non-hegemons–but more on that book later. If you’ve decided to read a big book, by all means, leave us a comment and let us know what it is. A few friends of mine turned out to be reading Middlemarch too. Hooray! We will read together.

I’ve already read Middlemarch though. I read it in college for a Victorian lit class, but I remembered very little about it other than that I’d disliked it. I’d skimmed. And when I read the first 50 pages, I remembered why. Dorothea Brooke’s youth and beauty are extensively described in the opening chapter, as well as her priggishness and sanctimony. She has an admirable desire to live the life of the mind, and learn from brilliant scholars, and this is what leads her to marrying, against the hopes and advice of the surrounding community , the Reverend Edward Casaubon. He is about thirty years older than she is, near 50, and his physical repulsiveness and decrepitude is described by her younger sister Celia who struggles to hide her revulsion. He has hair growing from moles on his face. Fortunately she didn’t describe his breath, but it hangs miasmatically in the book’s atmosphere. And this is as far as I got, page 51. I am encouraging myself to continue after this unpromising beginning, though if it develops along gothic lines, well then that’s another thing. But George Eliot, famously, didn’t submit to the 19th century marriage plot so why does Dorothea Brooke?

I was also put off by discouraging passages encouraging defeatist positions on women’s potential and possibility. The prologue extols the admirable qualities and goodness of Saint Theresa, and how so many women are not given the opportunity to fulfill their promise. And what to make of epigraphs such as “Since I can do no good because a woman, Reach constantly at something that is near it” which precedes chapter 1, and casual observations by the characters that even a man’s ignorance is superior to a woman’s intelligence, whose intelligence is downgraded  to “cleverness”, like a dog performing tricks? Again, George Eliot’s anachronistically liberated life could have informed the lives of her characters. Why didn’t it?

So, we have begun. I’m sure to discover what is great about this novel soon. I just haven’t yet.