You know Henry David Thoreau, author, transcendentalist, author of Walden Pond, a celebrant of the simple life lived in nature? He seems an unlikely candidate for a technophile, but often the least likely among us are susceptible to the allure of technology. His diary entries in 1851 present quite a poetic view of the newest technology to come to New England: the telegraph:

1851, Sept. 3.  As I went under the new telegraph wire, I heard it vibrating like a harp high overhead. It was as the sound of a far-off glorious life, a supernal life, which came down to us and vibrated in the lattice-work of this life of ours.

1851, Sept. 22. I put my ear to one of the posts and it seemed to me as if every pore of the wood was filled with music, labored with the strain–as if every fibre was affected and being seasoned or timed, rearranged according to a new and more harmonious law. Every cell and change or inflection of the tree pervaded and seemed to proceed from the wood, the divine tree or wood! How much the ancients would have made of it! To have a harp on so great a scale, girdling the very earth, and played on by the winds of every latitude and longitude, and that were, as it were, a manifest blessing from heaven on a work of man’s! Shall we not add a tenth muse to the immortal Nine? And that the invention this divinely honored and distinguished–on which the Muse has condescended to smile–is this magic medium of communication for mankind!

I felt the same way about the internet when I first encountered it–a magic medium of communication for humankind! It’s often difficult for us to “see” this kind of magic anymore because we now know where it has ended up. Power lines, telephone lines–these are not a thing of great beauty, to us. They don’t look like harps to us. This has been beautifully illustrated by Robert Crumb in a drawing titled “A Short History of America”: 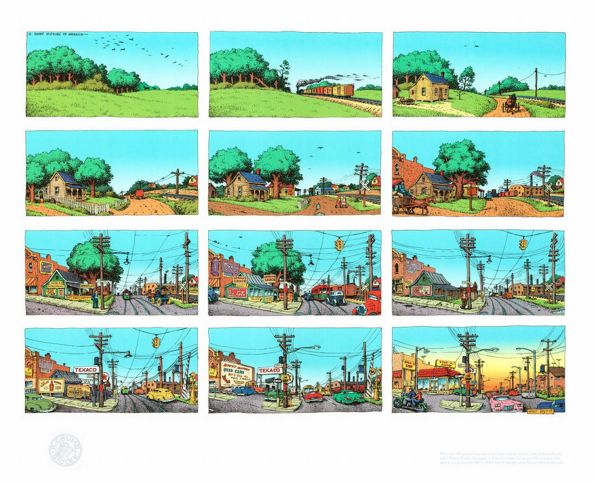 Thoreau lived in frame 3, and we live in frame 12. We can see beauty and nature disappearing, and see that, maybe it would have been better to put those lines underground. And that it is up to us to make frames 13, 14, 15. Can we improve it? What will frame 24 look like?

Not only the built environment, but the inner life has been changed by what Thoreau sees as the  “magic medium of communication for mankind”. This is what I first loved about the internet:  it connected us to each other. We love to connect!

But we’re not communicating any more. We went past Dunbar’s number, beyond the number of people we can meaningfully know, which makes our relationships brittle and thin. Fake news, platitudes, bias, and not seeing our friends anymore– just reading their updates–is what it’s come to.

This passage from Thoreau tells me three things: One, we should not forget the wonder of being able to communicate with one another across great distances. All the wonders of the internet are still there: we should see it again with it’s magic. Two: we should pay attention to the past to learn for the present. And three, living as we do in Thoreau’s future, where we can see the future outcomes of those telegraph wires, we should think deeply about the future we ourselves are creating and guide it to a better, more beautiful, future.

Walden and Civil Disobedience by Henry David Thoreau. Many people now say that Thoreau’s stay at Walden Pond was more like an early example of performance art then any commitment to living permanently in simplicity.  Still, the virtues of living simply resonate in our overstimulated, trivia-filled lives. And this edition includes Civil Disobedience, his great ode to freedom, which inspired non-violent protest everywhere is a must-read for all of us. Libertarians and liberals alike have marched beneath its banner, and the fact that it can encompass so many diverse viewpoints is a testament to its depth and power.

America by Robert Crumb. Have Thoreau and Crumb ever shared a page? This may be a first.  Both are deeply American. Thoreau is easy for me to like, but

I have a love-hate relationship with Robert Crumb. If you haven’t seen the fantastic Terry Zwigoff documentary about him, Crumb, you must, and it will help you understand where he’s coming from. But I have to work hard to get past the pornography, misogyny, racism and scab-picking ugliness of all he does, in order to appreciate the great things he’d done, like that comic above, and his nasty (NSFW) 1989 comic about Donald Trump.

Yes VC is an early stage investment fund where I am a co-founder and General Partner.
%d bloggers like this: