Through my online pal Gripper’s Findery post, I learned of the YouTube channel of David Bull, who practices the traditional art of Ukiyo-e. I grew up in a house full of Japanese woodblock prints, and, as an artist and as an early member of the Etsy team, I have a love of the handcrafted. One of the best things the internet has done is made it possible for people like David to make a living practicing ancient arts.

David runs a YouTube channel, which has videos of him and his team carving the wood blocks, painstakingly laying down each color, talking about new editions from his collaborator, Jed Henry, and telling stories about his experiences meeting elderly masters of the art in his friendly, impassioned and charming way.

I sent away for one of the prints, which I received today. It is gorgeous. 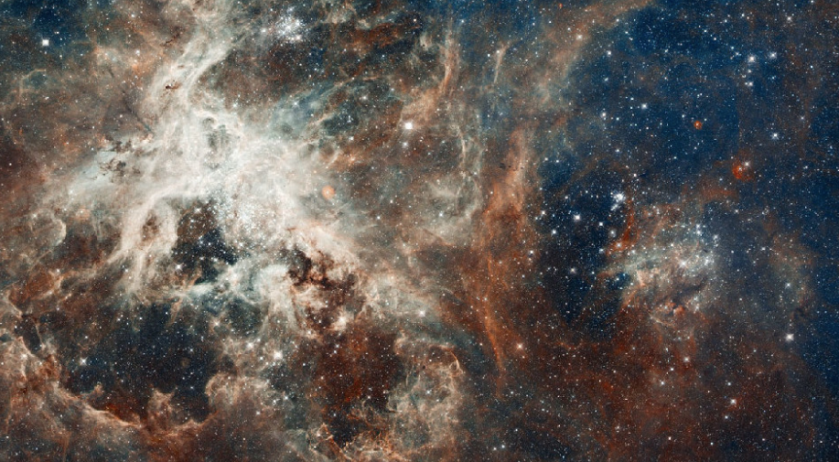 When the news gets you down–and it’s been getting me down consistently since November 8, 2016–it’s good to be reminded of how insignificant all of this is on a galactic scale.Here’s today’s “let’s put it in perspective” news story: Massive Stars are more Common than Believed. We’re talking huge stars, 15-200x larger than the sun, that were just discovered using the Very Large Telescope.

Ponder this: The diameter of 30 Doradus is 600–700 light years. If you put it at same distance to Earth as the Orion nebula (about 1300 light years away), Schneider calculates it would cover 60 full moons of the night sky. It would be so bright it would cast shadows.

• How to raise a feminist son. Unfortunately, raising feminist daughters doesn’t have much effect unless we also raise feminist sons. Dads! Husbands! Justice will not be served until those who are unaffected are as outraged as those who are.

• How to make things right if you’ve made a mistake. Dale Dougherty, the CEO of Make Magazine and those (awesome!) Maker Faires wrote a tweet & made assumptions based on a sexist world view, realized his mistake, and wrote a blog post in which he explained his mistake and  committed to making amends. People make mistakes, but can make amends too. A model of how to do it.

• Experts in the Field. An account of sexism in the writing world. The article begins on the topic of Trump’s ascendency:  “I knew he would somehow win,” she said, “because my life has been continually shaped and distorted by the greed and ignorance of men like him, in positions of power, taking everything they can get, whatever they want, whenever they want. What am I, what is my very life, if not a projection of and product of the desires of such sick men?”

• What to do when you witness harassment in a public place. This is about Islamophobic harassment, but it works for all kinds: 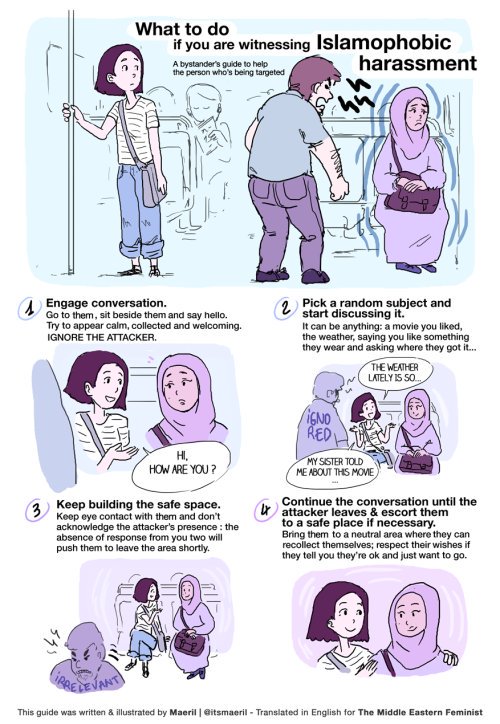 • In dealing with harassers, abusers and other people who’ve hurt you, first, recover as best you can. If you want to do the world a favor and talk to the offender, which is not your responsibility in any case, one approach is this. It is derived from a passage in the Bible, that old manual of the patriarchy, Matthew 18:15-17:

15. Moreover if thy brother shall trespass against thee, go and tell him his fault between thee and him alone: if he shall hear thee, thou hast gained thy brother.
16. But if he will not hear thee, then take with thee one or two more, that in the mouth of two or three witnesses every word may be established.
17. And if he shall neglect to hear them, tell it unto the church: but if he neglect to hear the church, let him be unto thee as an heathen man and a publican.

Matthew 18:17 was written by patriarchs in a different era. To translate, publican would mean “tax collector”. Non-church members, replace the word “church” with whoever is your community’s neutral arbiter, and “heathen man and a publican” in contemporary parlance would be “someone you should avoid”.

•  Always remind yourself that history is written by those in power and you should find the hidden stories of those not represented and mentally correct it.

“We believe the one who has the power. He is the one who gets to write the story. So when you study history, you must always ask yourself, Whose story am I missing? Whose voice was suppressed so that this voice could come forth? Once you have figured that out, you must find that story too. From there, you begin to get a clearer, yet still imperfect, picture.”

•  Thomas Pynchon wrote about the Herero genocide in V and Gravitys Rainbow, without writing like a colonizer. Literary geniuses, take note!

“It is art that makes life, makes interest, makes important, for our consideration and application of these things, and I know of no substitute whatever for the force and beauty of its process.”

• At the Near Future Summit, one of the most astonishing presentations was by Osman Kibar, the founder and CEO of Samumed, a biotech firm, valued at $12 Billion, which proposes to reverse aging, restore eyesight, fix Alzheimer’s…the list goes on. It boggled the mind. My kneejerk reaction is that if it sounds too good to be true, it usually is. But what if it were true, that we could make our cells re-regenerate? If we do eventually die, and Samumed releases all their magic, we’ll feel great up until death and look beautiful in our coffins.

• Fantastic talks here at #nfs2017.  I think we’ve found the new TED, and learned so many things. I knew that during Lincoln’s day the average person read as much in their lifetimes as is contained in the Sunday Edition of the New York Times, but I hadn’t known that in Medieval times people met only 150 people in their entire lives. We encounter that many people after an hour spent on the internet. Dunbar Fatigue.

• Our friends took us for a lunch at Gjelina in Venice, where we ordered a round of vegetables (broccolini, Brussels sprouts, carrots), then the Duck Confit, which was divine, and then the butterscotch cream something for dessert. Recommended!

• Some lovely pastel-colored motion graphics with some facts about the internet, by Sander van Dijk

Tyranny does not begin with violence; it begins with the first gesture of collaboration. Its most enduring crime is drawing decent men and women into its siege of truth.

Wendell Berry is a great writer on community, the local, and how to organize a life. These  notes are from his collection of essays Home Economics. I also recommend What are people for?.

Stopping demagogues and unqualified candidates is why the Electoral College was created. Time to reread The Federalist Papers by Alexander Hamilton. Jon Zieger paraphrases and explains:

The intention of the electoral college is to protect us from interference in our elections by foreign powers and from unqualified candidates who rise up quickly based on “little arts in popularity”;  to stop “foreign powers… gain[ing] an improper ascendant in our councils… by raising a creature of their own to the [Presidency].” its purpose is to “afford a moral certainty that [POTUS] … will never fall to any man not in eminent degree endowed with the requisite qualifications as a majority of votes might not … happen [go to] one man, and as it might be unsafe to permit less than a majority to be conclusive…it provides that, in such a contingency, the House of Representatives shall select the man who … may be best qualified”

If there were ever a case for individual electors to exercise judgment independent of their state populations, this is it. And doing so would be consistent with both the constitution and the intention of the system as expressed by the framers.

21 States do not restrict their Electors. There is already unrest: Texas elector has said he couldn’t support Trump.

I have been reading Virginia Woolf’s Diary Vol. 2. It has been good, and I recommend it.

I haven’t read it in years, and had forgotten how much she lived for other people’s compliments, how insecure she was, how she flowered under another’s approval, and how she withered beneath another’s dismissal. I also noticed how much she speaks of, and thinks of, her household, particularly her servants. It’s remarkable how much help she had, really. And Leonard, always in the background, a tremendous support to her. And I had the thought that, for someone with such an active social life, how could she have fallen into her dark periods, as friends and family are a balm for the trials of life. 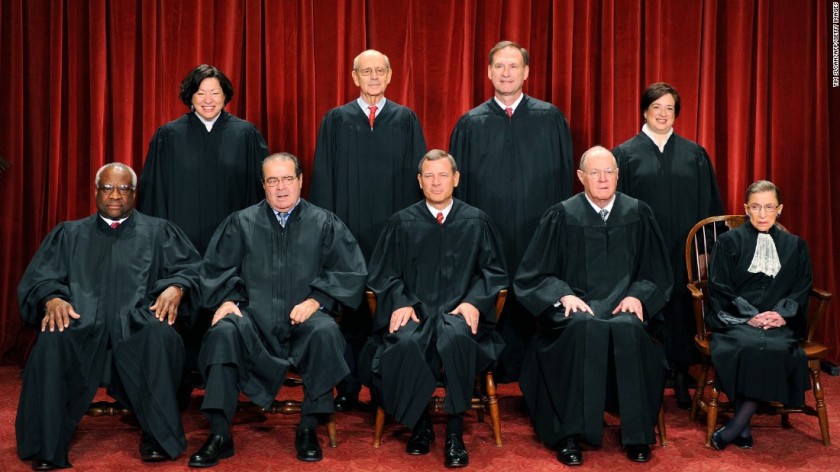 Here’s a useful guide to non-controversial types of speech that are not protected by the First Amendment, as recently re-articulated by the Supreme Court. Note that “hate speech” is not among them:

From 1791 to the present the First Amendment has permitted restrictions upon the content of speech in a few limited areas and has never included a freedom to disregard these traditional limitations.

These historic and traditional categories are long familiar to the bar, including obscenity,  defamation, fraud,  incitement, and speech integral to criminal conduct–are well-defined and narrowly limited classes of speech, the prevention and punishment of which have never been thought to raise any Constitutional problem.

How To Spot And Critique Censorship Tropes In The Media’s Coverage Of Free Speech Controversies A superbly useful guide to help you understand who is right and who is wrong when they invoke the First Amendment in the media.